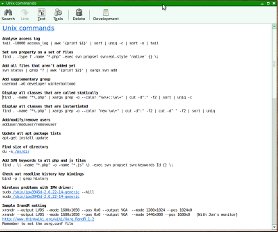 If you’re anything like me, you spend a lot of time at the UNIX command-line manipulating the filesystem, configuring Linux, playing with services and so forth. As any UNIX user knows, tremendous power can be wielded through judicious function selection, piping and output redirection. It’s often quite staggering what can be achieved in a single line given a rudimentary knowledge of sed, grep, awk, cut…

Indeed, when I stumble upon a line of particular elegance or usefulness, I generally log them to a Tomboy note (fired up in a flash using Gnome-do). This has proved extremely useful as I am often returning to the list to recall how to, say, rsync a fileset with an exclude list - it’s generally faster than Googling or going to the man pages. As time has progressed though, this small repository has grown into a sizable collection and finding a particular command quickly is now a problem. Motivated by this problem and taking inspiration from my daily reading (Hacker News, Programming Reddit and Stack Overflow), I’m in the process of putting together a lightweight web-app for cataloguing and ranking notable UNIX one liners. 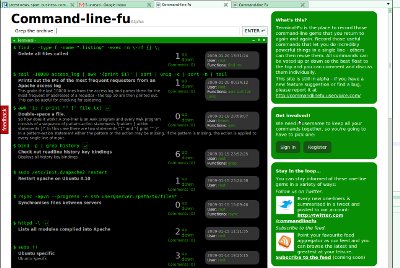 The basic idea is for users to be able to store their useful one liners on the site for (a) retrieval in the future and (b) sharing with others who undoubtedly will need to save the same problem. Once created, these commands are parsed for the functions used and any relevant tags to provide good navigational props. The individual commands also be discussed and commented on. Further, users can vote on each others commands allowing simple leaderboards to be constructed. After a few months, it will be interesting to see what the top 10 most useful awk commands are.

It’s only been a week (working piecemeal after dinner) but the site’s nearly ready for a beta release. It’s constructed using a combination of CodeIgniter and Zend Framework, making use of the fast and lightweight nature of CodeIgniter coupled with the extensive range of components that ZF provides. The site’s called http://www.commandlinefu.com and should be live in about a week assuming I find some spare time over the weekend. Watch this space.

Something wrong? Suggest an improvement or add a comment (see article history)
Tagged with: commandlinefu
Filed in: projects

Previous: Phing task to create an Unfuddle message
Next: The most important command-line tip - incremental history searching with .inputrc